“Do not move an ancient boundary stone set up by your forefathers.”  Proverbs 22:28 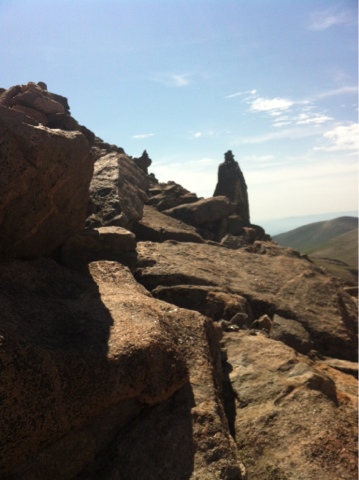 Maybe it’s the 10 years of marriage, or the 4 kids, or finding my first grey hair…or the college student I was talking to at Starbucks who called me “Sir,” but I am starting to feel like an old curmudgen.
While I was climbing Mt. Evans a few weeks back, I was constantly looking for the cairns–a pile of rocks that mark the trial.  At one point on the hike, I stopped to shed my outer jacket, and a young woman blew past me.  Thinking she knew the way, I started to follow her path.  After 10 minutes, we finally reached a place where her path ended and set us on a precariously dangerous slide.  It was then that I noticed that the cairns were about 25 feet below us.  We had missed the turn, and had put ourselves into dangerous territory.
Hanging onto the edge, I came to see the wisdom of Solomon in Proverbs is not only for our own safety, but for the safety of those who are following after us.  If we move the ancient boundary stones and we brashly follow our own path, then we are taking others past the warning signs into dangerous territory.
In our modern, individualistic and autonomous culture the concept of ancient boundaries are considered repressive, stifling and uncool.  Our generation’s mantra of “you don’t know me” implies that we have the freedom to strike out onto dangerous paths ignoring the markers and trails blazed by others before us.  We have this false pride that thinks our situation is totally unique to human history (we may feel alone, but the truth is many have gone before us if we would just look for those markers).
I have become worried that even within the church we have begun to move the ancient theological boundaries that were set by our forefathers.  The cairns set by God through His Word have been moved or even torn down by our culture, the academy and even the modern church.  And without these ancient boundaries, it has set us out on a dangerous path.

What do you use as cairns in your life helping to set the best path?  Why do you think we feel the need to blaze our own trail?  Where have you felt out on a ledge and alone?  How did you get there?

One thought on “Devotion: Moving Boundaries”