Skip to content
My usual recaps start at the starting line…not the night before.  But the sheer fact that I never fell asleep before this race seems worth noting.  All my other races, I have tossed and turned, and watched the clock wind down, so I know that sleep the night before is a tedious endeavor, and not necessary.  But never had I stayed up the entire night before.  This night I got desperate enough to try to go sleep in my hammock in the backyard. As I settled in though, and heard rustling in the bushes…suddenly my heart rate peaked at 182bpm and I knew sleep was utterly pointless.
By 4:50am I arrived at the AG staging area.  Sleeplessly greeting my new teammates of Kirk, Santa Maria & Doobie, as my original team had disintegrated over the summer.

Mistake #1:  I left my recently purchased gloves at home.  Thankfully the generous PAX of F3 responded, and SpookyJohn provided an extra pair.
Mistake #2:  I fell asleep on the three seater back row of the bus, only to quickly become the doorman to a traveling-port-a-john.  Too many men with too much coffee filled with cliffbars!
As we unloaded the bus, grouped up with the F3 men, signed our life away on the waivers, and filed through the chutes the sheer view of 250+ F3 PAX said that this event was gonna be different than any other race I’d done.  Having never done an obstacle race and having never been around military personnel, I wasn’t sure what to expect.
But team “Bringing the Juice” took off full of smiles, until we hit the first obstacle.
#1–Interestingly, it appeared to me that as I approached the 3 different 5 foot walls that each one was shorter, but amazingly more difficult to clear.  So began the mental and physical aspect of this race.
From there we came across a member of the PAX who had lost his shoe deep in the sludge, and spent two minutes digging out an unseeable shoe.  Now I understood the “mud” was not going to be like a rainy run in McAlpine park, but a thick, sole-sucking (or more aptly, soul-sucking) mess.

Hitting the 5th obstacle–the rope swing–was my favorite as it brought back memories of swinging across a creek in my childhood home…sure wish I signed up for a Spartan Race where that woulda probably have wrapped up the event, given me a javeline to toss and a medal.

But this was the Marine Corp Mud Run so we continued on to the 6th obstacle…8 logs dipped into watery mud, and one loud marine shouting “if you touch the logs I will penalize you.  Get in there and get under.”  Not the usual hand-holding-kumbya-love I get from the ministry, so I dove deep into the mud…with my eyes open.  As I pushed through the mud smiling and trying not to drink the mess, I thought this race was gonna be awesome…then came Mistake #3: Contacts.

Coming out of the water, my contacts fogged over and from that point on I had a large piece of mud stuck to my right contact for the rest of the race, which irritated my eye for the next hour and I could not see a thing out of it.  With limited depth perception, the race became interesting as I relied on my teammates to direct where best to hit the obstacles.

Hitting the 13th obstacle, a ridge trail run I finally felt back in my element: sprinting up the hills, and recalling the joy of running the BlueRidgeRelay.  Here is where I passed a friend who would be doing the Chicago Marathon the very next day…ugh, I felt bad for him…but at least got to stretch out my legs and run a bit.

And that was quickly taken away from me as we approached some contraption with inverted monkey bars, and a wall to pull yourself over.  Having no clue how to go forward, I leaned on my teammate to help asking Kirk to pull me over.  But Kirk sat dangling to my left trapped at the same spot, so we both waited for Doobie and Santa Maria to come to our rescue.  It was then that on my otherside a chick proceeded to onearm snag the handhold and flip herself up.  #humbled

Up next came the Grinders.  These telephone poles covered in mud and varying between 5 feet and 12 feet (well they felt that high at least) were tricky.  I jumped on the first one, hugging it tightly, when gravity took over and I began to roll…back the way I started.  Landing flat on my back, I realized I had to do it over.  The Grinders won my least favorite obstacle (especially when they were duplicated .25mi later).

From there we began to chug up sand hills, the middle of the race became a mix of waterholes, mud trenches, logs, and mud.

Somewhere around there was a pit with a rope that you had to pull yourself down, with your legs wrapped around the rope.  Mistake #4: Not wearing high socks per Mutiny’s advice.  Rope burn, coupled with sand, grit and mud cut up most of my legs.

So when I jumped into a warm mudpit later and could feel the burning and tingling sensation, I just assumed that was what a staph-infection feels like.

It was here that I heard a loving couple arguing with each other as she complained about him kicking mud in her face, and his thoughtful response, “sweetie this is called a mudrun.”

Pushing on, our team cleared a 10′ high wall with pure teamwork of communicating and executing.  This opened up a decent gap for us, so that for most of the rest of the race we had clear access to the obstacles.

Passing under the cargo-net into a sandpit felt like the months of bear-crawls in Freedom Park’s volleyball court…which made me realize that F3 perfectly prepares you for the different obstacles of this race.  And the #mumblechatter of Dredd allowed me to tune out the screaming marines.

Then I met the marine at the final wall climb.  Coming out of the mud-pit (me on the right), I was jogging up the hill as a marine yelled, “no one walks up my hill.  get up here now…” Completing his obstacle and heading away, he shouted, “with that weak of performance, you probably should sign up for the ‘AirForce’ mud run next year.”  I suddenly realized why I never entertained joining the military. 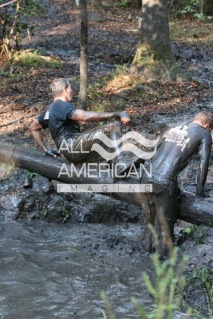 Gassed…we came to the Arm Walk obstacle.  Having watched the training videos, 24 hours before the race (perhaps that’s why I did not sleep–video below), I knew how to complete this obstacle.  With a shoulder injury suffered on the grid-iron of COED, non-contact, seminary flag football 10 years ago, however, I struggled to get across this obstacle, which began my slow demise for the rest of the race.

Knowing that our final obstacle was the 100 yard fireman carry, however, we gritted it out.  Then near the finish, Kirk gave out our final command to pass one last team and break through the finish line together: 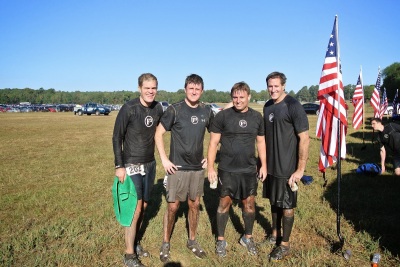 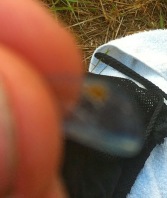 Once I dug the contact out of my eye, showered three times in one day, nourished myself with a ChiliCheeseburger from Rush’s, slept for 11 1/2 hours straight, and watched the Panthers finally win, I’ve been able to reflect on the greatness of this MudRun that bonds men into a team, pushes you mentally, and causes your body to hate you the next day.