Last year, my RaceRecap closed with the words “pushing my body to a new level of adventure and extreme has made for me the BlueRidge Relay the best time of my life (excluding my wedding, kids birth, and yadayadayada all those other important dates too).”  So I decided to push that level of adventure and extreme to new heights (or really depths), and join a 6man team this year.

I have never been so repeatedly put into the HurtLocker in order to see who I really am.

After the race, our van driver, TD, made a fascinating comment.  He said it was interesting to watch each one of us get to our breaking points and how we responded to the adversity: Giving up, belittling, cussing, self-hatred, anger, or quiet resolve.

Through that lens I was able to look back and see how I responded.  This was not just a running race, but an opportunity to explore one’s mental, physical, emotional and spiritual response to challenges. For me, the breaking point caused me to turn turn inward with frustration and a guilt that I had “let my team down.” That mentality was capstones when I chucked any empty water bottle and cussed myself out for having to walk the final leg.  It highlighted a recurring belief that somehow I should be able to accomplish more than I am capable of, drawing back images of being an undersized lineman always having to prove myself (but to get to there let’s start at the beginning). 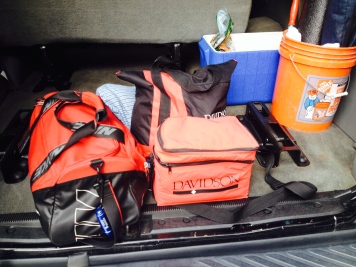 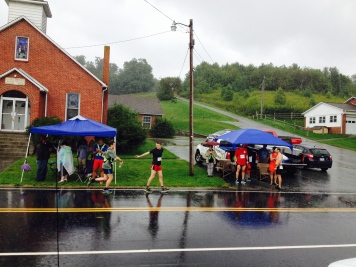 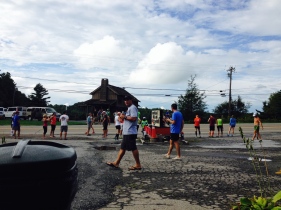 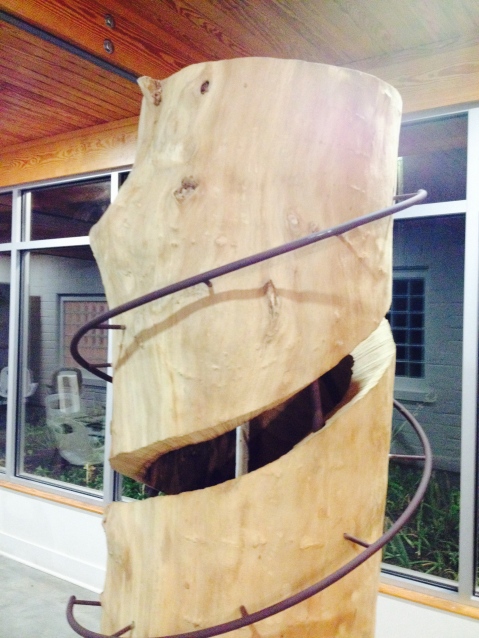 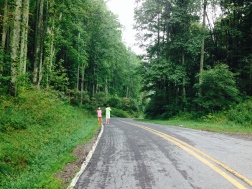 I was pleasantly chatting with friends at the start of this leg.  It was at this very church parking lot the year prior that I declared the BRR the greatest event as it combined my love of fitness, love of fellowship and love of faith all into one event.  Seeking to relive that experience I was grateful for chatting it up with CR, Snoop, Flay, and others.
Then I looked over my shoulder and saw Postfontaine sprinting in.  I have never cursed someone under my breath before, but seriously where in the heck did he come from so quickly…and why…oh why did I request this runner position now that the beautiful images of Leg1 had long been puked out of my system.
I regrettably took the blue bracelet and slapped it around my wrist and lumbered off.
The first mile and a half were perfectly flat, yet at .25 of the first mile I got a double stitch cramp on both sides of my abs; and I was already hunched over.  I knew this did not bode well, my body was done.  My initial goal had been not to walk this leg, but by that point I realized that was foolishness, so the goal became not to walk until the switchbacks.
However, that new goal changed as I turned to begin the mountain goat climb.
I quickly calculated that this would be like doing 24 trips up the Muthaship in Charlotte (a large circular parking deck) with no descent.
But I lumbered on, and as each van approached I picked up my gait in case it was our team van to “pretend” like I was destroying this beast.
Eventually, I figured I was nearing the halfway point, and cracked and looked at my new GPS watch.  I had now permitted myself to walk once it said 3.5 miles…it said 2.66.
I walked anyway, and just as stopped to walk my van approached which caused me to I forgot any attempt at pretend like I was a stud and begged for water and gracefully responded to TD’s “how you doing?” with “I am going to get up this f#cking mountain.”
Once I had stopped I knew I would have to resort to a run-walk-walk-walk-walk-walk-trot-walk-walk-walk-walk-walk-walk-walk approach for the rest of the final leg.  So I set up a plan to run .5 miles, and walk .25.  And off I went.  Then I looked at my watch again assuming I was nearing the .5 mile plan…I had gone .16.
Plans versus Reality. This is where I tossed my water bottle and broke.
But the cheerfulness of TD helped me chip away at this leg. And at mile 4 I was caught by Subway, I man I had trained with (well technically behind).  His encouragement helped me gain perspective and journey on.  Yet I eventually had to break stride from him because I began to puke yet again.  (Side note: this moment is actually recorded in the above elevation chart as the only elevation loss of 3 feet where I bent over to hurl).
Moving into delirium, I knew I was deep into the HurtLocker, and may have thrown in the towel had I not seen my van stopping about every mile to keep an eye on me; they became my safety net.
From this point on, it was pure foolishness as I was so far gone, at one point I remember thinking I saw my van driver hiding in the trees, but then on the next switchback he was outside the van cheering me on and ready to dump water on my head.
Eventually, somehow, miraculously my watch buzzed mile 6.  A half mile to go.
At this point, I dug deep and dreamt about my training run with the triplets and my wife.  We live on a .25 mile hill at 7% grade.  One great Sunday afternoon, I ran that hill 10 times with Thomas and Lindsay while James handed me water.  This memory motivated me to run into the finish so I could crack a 13:00min pace and finish the pace at 12:59.
Kills: 0.00
Killed: Too many to count
Chicked: 1
Total Stats:
Distance: 31.16 Miles
Time: 4:39:34
Pace: 8:58
Kills: 12
Two days removed from this event my mind is still a flood with thoughts. I loved the commrodarie of the race, texting and tweeting and chatting with people along the way.  I am amazed at the difference in a 6 man versus 9 man team as I covered nearly the same mileage but the difference in recovery time, sleep deprivation, fatigue and that dang mountain goat formed to entirely different experiences.
Life lessons