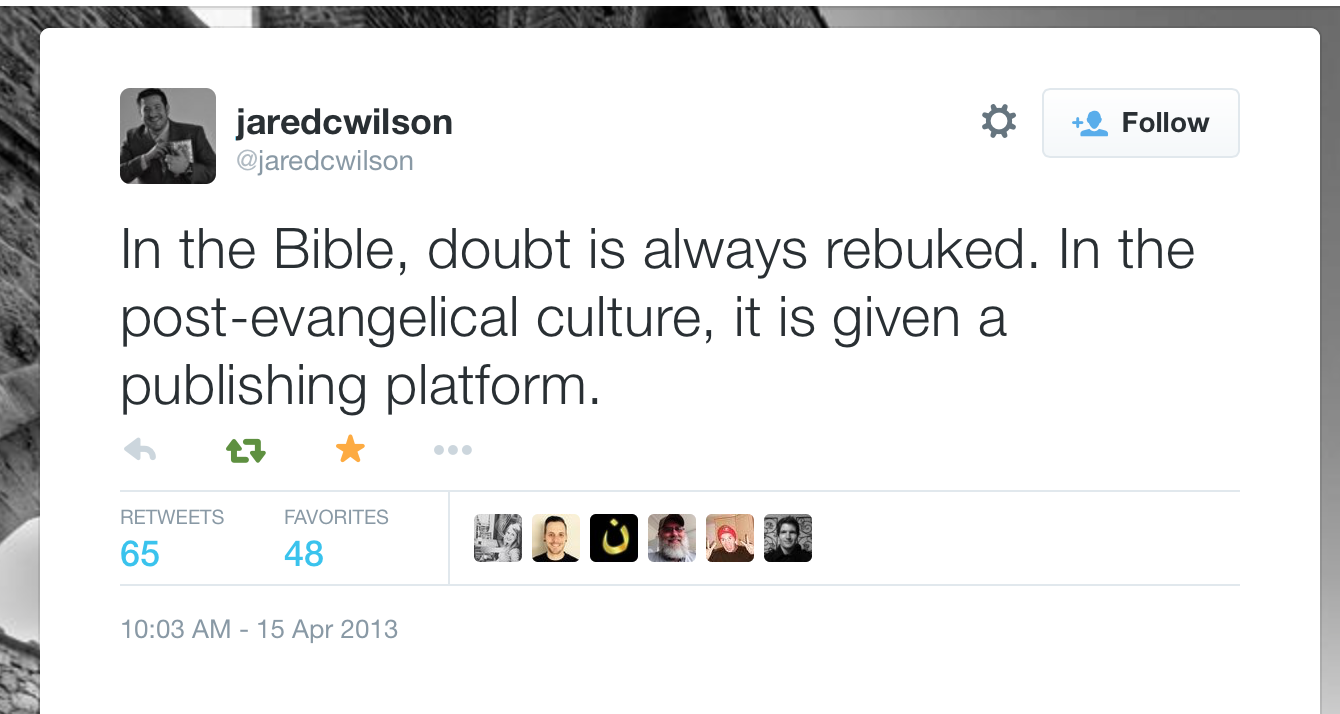 In recent months I have been intrigued at how “doubt” has become the word dejour within cultural Christianity. Rachel Held Evans is now the poster-girl for a conservative Christian who had an epiphany of doubt. Then, once you throw in Rob Bell, Brian McLaren, Barbara Brown Taylor–and that’s just the Bs–there is this soupy new belief I call “Doubtism.”

Yet the Bible is relatively clear on its dangers. As James describes it:

If any of you lacks wisdom, he should ask God, who gives generously to all without finding fault, and it will be given to him. But when he asks, he must believe and not doubt, because he who doubts is like a wave of the sea, blown and tossed by the wind.”

“Doubtism” leaves us wandering and questioning everything. It returns us to the punishment inflicted in the Garden as it displaced Adam and Eve from God’s presence and then caused Cain to become a restless wanderer. It leaves us on shaky ground unsure about the stability of our next step. This form of doubt is deceptive, dangerous and deadly.

The problem is that in promoting “doubtism” we have misunderstood that questioning is different than doubting. Jesus is always peppered with questions of people who are seeking to draw closer to Him.

Interestingly, though, in Mark 7, a Syrio-Phenician woman is the only encounter where Jesus is not asked a question but boldly confronted; she is only one who correctly interprets his parable. The most unlikely of characters…a Gentile woman of Syrian Phoenician descent. As a good Jewish teacher Jesus should have avoided this encounter, yet instead Jesus empowered her to become the turning point of his ministry in Mark’s story. This woman’s sparring with Jesus is when Jesus moves from being the Jewish Messiah to being the Savior of the World. She is someone outside the faith tradition who is hungry for the saving grace of Christ. She doesn’t want to be fed the hollowness of Doubtism, but the Bread of Life.

She gets it–no doubt.

As a result she demonstrates a bold confidence with humility. She accepts the derogatory term given to her as “dog” (humility) but boldly asks Christ for crumbs. She has the confidence of faith to weather the storm of her daughter’s illness, to break protocol in order to confront the Jewish Messiah, to challenge his statement and in doing so ushers in Christ’s ultimate work to save not just her family but the entire world.

Rather than being battered around in the waves of life, why not try standing on Faith and see what happens? To believe with confident humility.