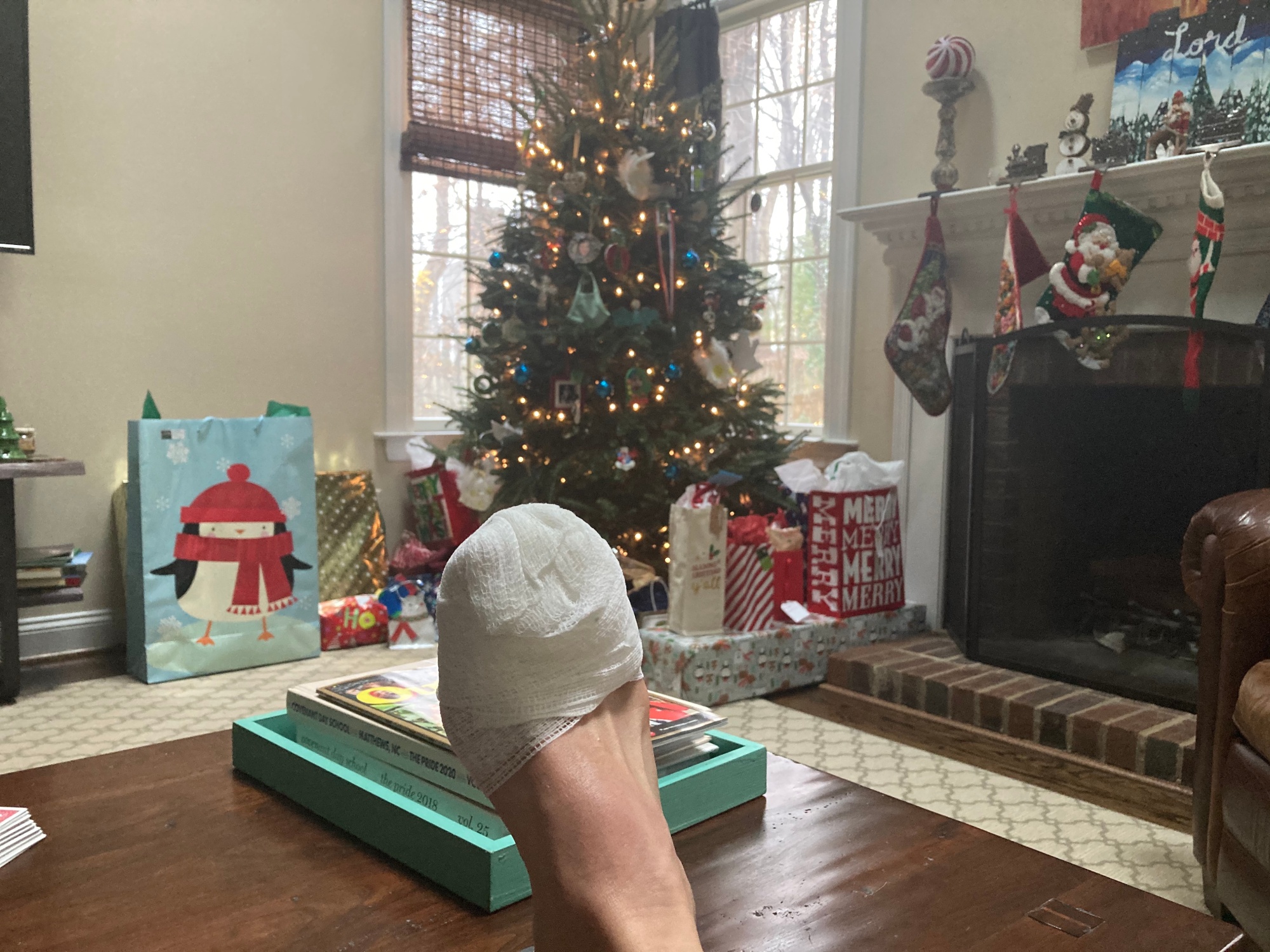 “He himself bore our sins” in his body on the cross, so that we might die to sins and live for righteousness; “by his wounds you have been healed.”

This week I have been reminded about the stories scars can tell (you will see why). My body is covered in scars. From melanoma excisions to swingset accidents to bouncing on beds and even plastic knife mishaps. There are three scars, however, that tell an interesting tale.

On the back of my left hand is a scar I got during the first football game of my senior year of high school. Well truth be told it actually occurred 5 minutes before the game, and not really on the field. We were facing off against one of our main rivals, when we headed back into the locker room after warmups. As we marched in, I held open the door for my teammates when one of my friends–who shall remain nameless–was so pumped up for the game he smashed the locker room door. Well, as I was holding the door handle it smashed my hand against the brick wall slicing it open. We decided to wrap my hand up and play the game before heading over to the ER. Once there, the doctor cleaned it out and had to reopen the wound at which point I was able to see the muscle and ligaments because it had been such a deep cut. (Interestingly, I just learned this week that my dad was chewed out by the doctor for letting me play the game). Of all the stories, this scar was received by my simple act of holding a door open.

Then there is a scar that runs across the tip of my nose. This one I received while volunteering at Warehouse242. I had recently graduated college and was part of their logistics team helping to set up and tear down this start up church. Immediately after church this particular Sunday, I had a job interview for a youth director position at another church. So I hurriedly took apart the pipe and drape setup at the back of the church. However, rather than grabbing a chair or getting a friend I tried to do it myself. As a result, the hook of the piping fell and sliced the tip of my nose. Without much time, I bolted to Walgreens to grab some liquid glue. As I arrived at my interview in a nice suit but a freshly glued nose, I tried to explain that it was a wound due to my dedication to the church.

And now…there will be two new scars on the toes of my feet. Like these other mishaps, this one emerged through my innate willingness to serve. As I was leaving church this past Sunday, I received the space setup request and figured I could knock it out on my own. Carrying the very last table for their setup — an 8ft solid wood buffet table– I tripped on a shoe lace and dropped the table on my toes. Somehow, I managed to pick myself up, and set that final table in place before I ended up in the ER getting X-rays to show that I had crushed the bones of two toes and needed nine stitches to repair two of the lacerated toes. Once again, I have scarred my body through simple and inconsequential acts of service.

Look under your tree, look around our community, look in your heart, look at your bank account–are you giving strategically or sacrificially this Christmas? To what extent are you willing to sacrifice for others?

During Christmas, we celebrate the sacrifice of God the Father to send his beloved Son to live with and for us. Not only to live, but also to die for us. The Jerusalem cross is a symbolic reminder of the five wounds Jesus received at his crucfixion for you and me.

That day, he had two nails driven the through the palms of his hands. He had a spike driven through his two feet, and he had a spear pierce his side. These five wounds remind us that Jesus was willing to go to the point of death, even death on a cross, to show his sacrificial love for us.

By the way–we lost the game, but I got the job.