My fall schedule had been set.

I started training in June. Running a foolish solo event called 4x4x24 (4 miles every 4 hours for 24 hours) simply because I had read about it in a Navy Seal book.

Then I began in earnest my Blue Ridge Relay 6man and New York Marathon Training plan.  That’s when I received a text “Hey Agony, want to run the Ragnar Relay this fall? It’s only 16 miles.” Never a man to back down from a challenge, I accepted. 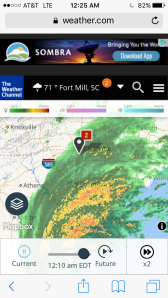 One of my favorite half marathons has been the Anne Springs Close Greenway years ago and so I eagerly looked forward to returning to these awesome trails.  That is, until I logged into Weather.com and noticed Hurricane Matthew would be hitting the greenway at the precise moment I too would be running it

Unperturbed, I went into the garage to gather the essentials for this rugged relay race. After loading my 180sq ft tent, my 800 square foot tarp, a 10×10 canopy, inflatable twin mattress, eno hammock, camping stove, white gas, excess paracord, camping chair, secondary tarp, portable battery box, bucket…and much more gear, I realized how much random stuff I have accumulated over the years. For a city boy with triplets, I go big when “roughing it.”

However, running with the F3 pax means there will always been a man one step out in front of you. That man is the one who arrived with his own private masseuse (or as she kept correcting me, “massage therapist”).

With our campsite up and running, I went to scout the trail conditions as weather.com had forecasted the rain to start at 5pm and not end until noon the next day. Precisely our start and estimated finish times.

Thankfully, at the trailhead I ran into Amy Peacock who convinced me on the necessity of true trail shoes with good tread. Eagerly, I located a pair–which had already been utilized and were smelly, sopping wet and covered with mud. The reality, though, was I too was about to return in that condition. So why avoid the inevitable. I strapped on the soggy Salomons and was ready to hit the trails.

Our team was the very last heat to go, so the trails had already been primed by 6 hours of other runners turning the dirt into mud. And as I turned from the gravel road onto the single track trail, I realized this race was not to be won but survived. The objective was not to go fast forward, but you had to hop from bank to bank of the mud to avoid slippage.

Decked out in my head lamp, my short shorts, my calf condoms, and trail shoes, the only problem I had was I was not sure what to do with my hands.

As it was already dark, all I know about this trail was that it meandered somewhere and somehow around some lakes, through a cow pasture (which I discovered due to the patties left in the middle of the field). At one point, I came across 5 people carefully stepping down a steep mud hill. With my Salomon shoes and foolishness, I felt invincible and threw myself down the hill at full speed yelling “Bonzi” as I charged past the saner runners.

In the end, this was my warmup lap…and I finished with a respectable time. Had I known the arch-nemesis (in my mind at least) Bull City Track Club was 14 sec in front of me, I may have been able to close that gap (or so I tell myself).

Leg 2: “This baby loves the slop…East’s The Slop.”

The weekend prior and the weekend after were my two long runs for the New York Marathon. This was a “recovery” weekend.So with that in mind, I went out to enjoy the aspects of trail running at 1am in the dark in a hurricane. This had not been on my bucket list, but, now it is. This run was a grand and glorious leg and the epitamy of my foolishness.

Knowing that I had to deliver a sermon in 24 hours, the lack of sleep, endorphins rush and steady rain drops provided the perfect opportunity to work through my sermon prep. Like Seinfeld waking up to write down his jokes, my inspiritations often come on long runs where theological concepts sound profound. But when I return to write down the ideas, suddenly they seem erudite. Yet on this leg, I realized the difference between trail running and road running. Road running you can keep your head up as you climb hills to open your airway and broaden your stride. In trail running you have to keep your nose down and watch your next step in order to avoid a rock, root or–in this case–a five foot drop into a raging river. Such is life–sometimes you can broaden your stride and gazzel through a week, but sometimes you dig in and grind through the next obstacle. AMEN.

That is what this course was. Crossing a swinging bridge, I turned left and climbed a giant hill. The single track had become so soupy in mud that I was calf deep in a gully. As I climbed, dove down the other side and continued through this muddy course a refrain began to play in my mind: “His mother was a mudder, His father was a mudder. He loves the slop.”

That was the divine revelation: I love trail running. Even in the mud, even in the middle of the night, even in a hurricane, I love it. The smell of rotting leaves, the uncertainty of the next step, the sound of scattering animals–trails are where I love to be.

Others though…not so much…as I came across one woman frozen in the middle of the trail beside a lake. Not sure if the splashing sounds to her left had been gators or frogs (well, she was convinced they were gators until I had proposed them to just be large frogs), she waited until someone else arrived to brave the dark unknown. Coaxing me to run ahead of her to scatter the gators from the bank, she fell in behind as I passed.

But I was enjoying the trail so much that I plodded along cranking out the miles. It was not until my left foot slipped into an ankle deep hole and narrowly come back out without twisting did I remember the danger and the bigger goal of surviving New York Marathon next month.

In the end, I pushed forward and finished the run. Wet, cold and tired I made my way back to my tent eager to flop onto my mattress and dive into my sleeping bag for the night. Little did I know that is when I came across the final obstacle of the race. Someone–let’s call him Wee Lilliams…no wait that’s too obvious…how about Captain Kirk–had crashed on my air mattress…and was using my sleeping bag as his pillow. I ever so politely laid myself down on the damp hard ground next to my mattress, and then began to tussle, cough, whoop and grunt. 20 minutes later, said Capt Kirk awoke saying, “oh here you go Agony, I woke up just as you came in…”

It was at about 6am, while I was nestled soundly in my sleeping bag on my mattress that I heard the voices of our team saying, “let’s get out of here…I am done with this.” And so began the prophetic packing up of our campsite.  With the wind and trail conditions worsening, Ragnar canceled the race. Meaning our teammates had each finished 2 of the 3 designated routes before tent stakes were pulled and our caravan headed to Waffle House.

In the end, I think I spent more time breaking and setting up camp than actually running this trail leg.

However, Ragnar Trail Races…in decent weather…have now leaped frogged the BRR as the greatest CSAUP event out there.

A month later, for my final training run, I returned to the Greenway to complete the Yellow and final loop. Probably not the way to train and taper for New York but I am not someone to leave a mission incomplete.

Running the trails on a beautiful fall day, I was back where I belong as a boy who loves the slop.

PS: bonus points if you can name the three cultural references the legs were titled after.