The BRR is like my Christmas morning…and this year I was excited to run the race with three couples and a friend from our neighborhood. The seven of us, plus an awesome driver took off into the hills. We figured spending 30+ hours in a van together would either go smashingly well or there would be For Sale signs in our yards by Monday morning.
However, an even greater test was how would a marriage withstand the challenge of the BRR. Every other race, all I have had to worry about was me. But getting to share this with Lindsay included a new wrinkle. Every day I get to see this woman’s grit and perseverance as she faithfully manages the chaos of the triplets and a pre-teen daughter. As she compassionately counsels women, and graciously manages my knuckleheadness. However, this BRR experience allowed me to witness her in a new light (though most of her runs were in the dark). She took on the challenge to run the extra 6th leg of our 7 person team. Therefore, she ran the most legs, the first and the last leg, the shortest, the longest, covered the most mileage, was swooped by an owl, encountered a bear (see below) and pushed herself to the edge. Being able to run this race with my spouse is a gift I really did not stop to reflect upon until just now. Along the way, I tried to capture the moments together, and you will notice that her smile never faded. In our family mission statement we state that “the Barry’s are at their best when they are active”–Mission Accomplished.

Leg 6: “This Ain’t No Mountainbrook”
Distance: 6.7 Miles up 2 mountains
Time: 54:41
Pace: 8:05
Kills: 11
Every year I forget. Every year I think that training on the Highview hills, and living off Mountainbrook in Charlotte shall surely prepare me for the elevation change in the Blue Ridge Mountains. After all, the Holy Hills route I created in my neighborhood did generate 1000ft of ascent over 6 miles.
But as I warmed up in the parking lot, I started speaking with the church’s pastor. As he pointed towards his church steeple, I noticed the road snaking behind the steeple, and slowly heading upward. That’s when he pronounced…you’ll be going up two mountains on this route. While the elevation on this route was serious, it is a great entry leg into the BRR. That is unless you still visualize the finish at the large Transition Zone at (another) Baptist Church. I had forgotten it had moved from there to the Christmas tree farm a few miles further down road.

Leg 13: “Out Running Your Coverage”

Distance: 9.2 miles
Time: 1:12:48
Pace: 7:45
Kills: 15
This was the leg I had trained for this season. This is what I wanted to come back and destroy. I ran this leg back in 2014 in 1:22:12. So one of my 3 goals for this year was to break an 8:15 pace on this route.
Running along the Blue Ridge Parkway into Blowing Rock was the perfect leg. The rolling hills, the incredible view of the Yadkin Valley and the setting sun all made for an incredible experience. It was pure joy.
And as I prayed, and rejoiced and pressed forward, I began to wonder whether I should text my team and let them know to expect me to arrive a little earlier. Nah, I said.
So I barrel down a ridiculous decline by the golf course in Blowing Rock, speed across the highway, avoid getting hit by an old man in a porsche convertible, and sprint into town. As I pass by Mellow Mushroom, I hear cheers of “Go Agony.” Cruising towards the finish, I start to hoot and holler for my next runner as I make the turn down to the pool.
However, as I approach the exchange zone the woman with the walkie-talkie looks at me and says, “I’m sorry, sir, but we cannot find your team.” So I try to text, I try to call, and momentarily consider running on…but just then Leadfoot Lindsay arrives with the team and their half eaten Chic-Fil-A sandwiches in tow.
Leg 20: “Third Time Is a Charm”

Distance: 3.8 Miles
Time: 26:52
Pace: 7:05
Kills: 2
This is my third time running this leg. All I have to report this time…is the kennel of dogs that sound like they want to chew you up is still somewhere out there. Beyond that…this is the chance to run fast at night. And fast you will because every rustle, every echoing bark makes you wonder if Cujo is coming for you. 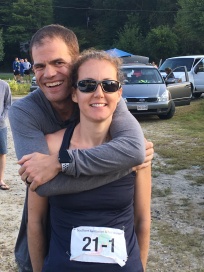 Leg 27: “The Road Goes on Forever, but the Party Never Ends”
Distance: 9.1 or 9.25. or 9.4 Miles
Time: 1:15:51
Pace: 8:11
Kills: 12
I’m gonna quibble with Ken on this one. His maps say that this was 9.1 miles. MapMyRun says 9.25. My watch clocked it at 9.4. Whatever the real distance, this run went on and on and on forever. I started to countdown the stripped lines construction crews had marked for future repair work. It went from #69 to #40 for those playing at home.
The course was nice and flat along a creek, which actually did not help the burning quads at this point. Strangely I longed for some uphills to at least awaken the hamstrings and quads up from the dull pounding each step took.
I also got to run this from darkness to daylight, which was the first time I felt the awakening of a new day while doing the BRR. It’s amazing how the sun can bring out hope and wipe away (at least temporarily) the weariness that was beginning to set in.
Leg 34: “An internal debate…do I Hold Back to Protect My Wife or Go All Out”
Distance: 4.5 miles
Time: 33:44
Pace: 7:30
Kills: 8
This was it…the finale for 2018. I had once watched a friend complete this run in the mid-day heat a few years ago. A trail of snotty sweaty looped from his nose down to his chest as he came across the finish line. Therefore, I knew what I was in store for. This leg is awful because it is just here at the end, and by this point the running is all mindless running. However, I moved quickly staying on pace through the race, until I reached the exchange zone. A guy had been walking in front of me, but as we hit the exchange zone sign he decided to not only run but try to sprint the finish against me.
Wanting to finish the entire BRR without ever having been passed, I went guns a blazing and streaked across the finish line. Then, I immediately crumbled into a massive heap before the scorers’ table pathetically panting to Lindsay the looming warning about her final run (See below).
2018 Total:
Distance: 33.85
Time: 4:23:59s
Pace: 7:48
Kills: 48
Killed: 0.0